Ever wondered how a TED-Ed animation is made? Go behind-the-scenes of “How do cancer cells behave differently from healthy ones” with educator George Zaidan, animation director Biljana Labovic, and animator Lisa LaBracio.

Additional Resources for you to Explore
Stop motion (also known as stop frame) is an animation technique to make a physically manipulated object appear to move on its own. The object is moved in small increments between individually photographed frames, creating the illusion of movement when the series of frames is played as a continuous sequence. Dolls with movable joints or clay figures are often used in stop motion for their ease of repositioning. Stop motion animation using plasticine is called clay animation or "clay-mation". Not all stop motion requires figures or models; many stop motion films can involve using humans, household appliances and other things for comedic effect. Stop motion using objects is sometimes referred to as object animation.
Adobe Photoshop is a graphics editing program developed and published by Adobe Systems.
Green screen, chroma key compositing, or chroma keying, is a special effects / post-production technique for compositing (layering) two images or video streams together based on color hues (chroma range). The technique has been used heavily in many fields to remove a background from the subject of a photo or video – particularly the newscasting, motion picture and videogame industries. A color range in the top layer is made transparent, revealing another image behind. The chroma keying technique is commonly used in video production and post-production. Green and blue backgrounds are more commonly used because they differ most distinctly in hue from most human skin colors. No part of the subject being filmed or photographed may duplicate a color used in the background.
Here's an example of a basic line drawing animation.
Here are two other lessons by George Zaidan: How do Pain Relievers Work? and What is fat?
Biljana Labovic has directed the animation of many TED-Ed Lessons. Here's a small taste of her work: How folding paper can get you to the moon, Exploration on the big data frontier, and Insights into cell membranes via dish detergent.
Lisa LaBracio has animated many TED-Ed lessons. Here's a small taste of her work: The key to media's hidden codes, Animation Basics: Homemade special effects, and Rethinking thinking

TED-Ed
Lesson Creator
New York, NY
Have you ever thought about animating?
What kind of animation would you use? What would you animate?
18 Responses
View discussion
upvote+2 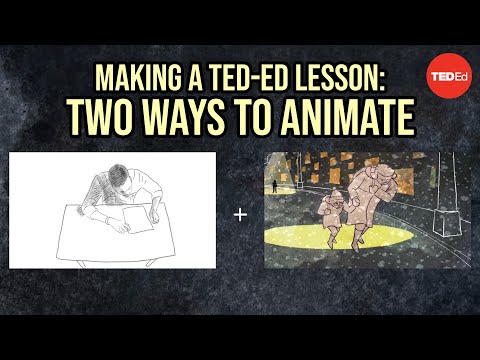