What is depression? - Helen M. Farrell

Depression is the leading cause of disability in the world; in the United States, close to ten percent of adults struggle with the disease. But because it’s a mental illness, it can be a lot harder to understand than, say, high cholesterol. Helen M. Farrell examines the symptoms and treatments of depression, and gives some tips for how you might help a friend who is suffering.

Additional Resources for you to Explore
Depression

We all have a variety of moods. These fluctuate over time and even within a given day. Changes to our internal emotional state can be triggered by internal and external stimuli. Normal feelings can be described as happy, sad, angry, fearful, upset and so on and so forth. Whether a mood is up or down, it’s a completely healthy experience provided one thing: that the individual has a sense of control over it.

There are all kinds of mood disorders – sometimes referred to as affective disorders. Depression, for example, is a major mood disorder. In other words, it’s a medical illness that is characterized by an abnormally low mood that is accompanied by a sense of lacking control.

Watch this video to learn more about depression, mental illness and how you can help to change the way people think about mental health.

It’s important to be aware of the signs of depression and seek treatment. The World Health Organization (WHO) has reported that depression is the leading cause of disability worldwide.

Stigma is an even bigger problem than depression itself. It’s what causes people to suffer in silence, on average for a decade, before ever reaching out for help. According to the WHO nearly 350 million people suffer from this medical condition – so if you or someone you know has depression, they are certainly not alone.

Qualifying for a diagnosis of depression requires five of the following symptoms to linger over a two-week period: low mood, loss of interest in pleasurable activities, changes in appetite, feeling worthless or excessively guilty, sleeping either too much or too little, poor concentration, psychomotor agitation or retardation (restlessness or slowness), loss of energy, or recurrent thoughts of suicide. Suicide is the extreme consequence of depression. According to the World Health Organization there is one death by suicide every forty seconds. You can find out more about the symptoms of depression from the National Institute of Mental Health (NIMH).

Depression can also have many variants including melancholia and seasonal gloom. More than 10% of new mothers experience postpartum depression. Some people will even experience catatonic depression, the features of which include: catalepsy (immobility), purposeless motor activity, mutism (not speaking), bizarre postures, and echolalia (repeating words) or echopraxia (mimicking another’s movements). Another variant of this major mood disorder is psychotic depression, which is marked by a severe disturbance in mood along with hallucinations or delusions.

There’s good news for people who have depression – it’s very treatable! Like many medical problems, it can be managed by taking a comprehensive approach to health care that involves healthy lifestyle changes, therapy, and the thoughtful use of medications.

Finding a compassionate doctor, or psychiatrist, is the first step. Psychiatrists are medical doctors who are specifically trained in diseases of the brain. They are skilled at treating people and getting them back on a path towards health and happiness. A mental illness such as depression might alter one’s trajectory, but it does not have to define it.

Even for those people who have a tricky form of depression – one that is seemingly resistant to medication and therapy – there is still hope. Electroconvulsive therapy (ECT) is an extremely effective tool that can change a person’s life. Check out more information about innovative therapies such as ECT on the National Alliance of Mental Illness (NAMI) website.

And in some cases, a brief stay at the psychiatric hospital can be a life-saving experience. Most of these psychiatric admissions are voluntary, but in some cases, when personal or public safety is at risk, there is an option for involuntary commitment. Regardless of the circumstances, the goal is the same for professionals and patients alike – recovery and healing. No matter the extent of one’s depression, there is always hope.

Need a bit more insight into depression? Read this TED Ed Blog Post: How do you talk about depression?

The original ring of power 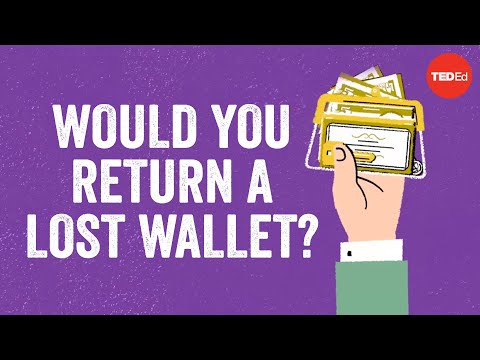 Would you pass the wallet test?

Ethical dilemma: Would you lie?

Ethical dilemma: Who should you believe?