Why do we, like, hesitate when we, um, speak? - Lorenzo García-Amaya

For as long as we’ve had language, some people have tried to control it. And some of the most frequent targets of this communication regulation are the ums, ers, and likes that pepper our conversations. These linguistic fillers occur roughly 2 to 3 times per minute in natural speech. So are ums and uhs just a habit we can’t break? Or is there more to them? Lorenzo García-Amaya investigates.

Additional Resources for you to Explore
You only have to watch a movie, turn on the evening news, or give a work presentation to realize how much we value “fluent-sounding” speech. Yet, in everyday communication, fluent speech absent of hesitation behavior is really uncommon; that’s because speech disfluencies are actually a natural and universal trait of human speech. For example, depending on the physical setting, social context, interlocutor, or a speaker’s language proficiency, language users may be more prone to producing speech errors or to repairing their speech as needed. In this TED-Ed video we focused on how prescriptivist views of hesitation phenomena, such as silent (or unfilled) pauses, filled pauses (e.g., uh, um), and discourse markers (e.g., like, you know, I mean), have not considered the very useful roles that these structures have for language users. In this section, we will dig deeper into the role that filled pauses may play for second-language learners and their interlocutors.
When we think about filled pauses being used in second languages, one of the first things that comes to mind is their frequency, particularly at the start of the learning process. One point worth clarifying is that in the TED-Ed video it was said that “the use of filled pauses doesn’t decrease with mastery of a language”; however, this needs to be understood within the realm of second language learning in the study abroad setting. In highly immersive contexts, where learners only use their L2 and avoid using their L1, research shows that the development of new and more complex linguistic structures occurs in tandem with an increase in the frequency of filled pauses. Let’s think about that: as language learners embark on the journey towards mastering a second language, they must build longer sentences with complex clauses, and that requires more processing.
In addition, language learners must juggle the conjugation of new tenses, produce unfamiliar sounds, incorporate new vocabulary words, and do their best to avoid grammar errors while speaking! For some learners the cost of this progress seems to be an increase in the usage of filled pauses in addition to a reduction of their length (i.e., more filled pauses but shorter in the time that it takes to produce them). Even after some time abroad (while practicing a new language), filled pauses will not magically disappear from a learner’s speech. On the contrary, the use of filled pauses fluctuates over time, with proficiency being one of the driving factors underlying this development. This progression actually follows a bell-curve, with the usage of filled pauses increasing as the language learner becomes more advanced in their second language, before settling to a lower rate as the learner reaches a stable level of fluency.

Filled pauses are useful not only to a second-language learner struggling to remember the correct vocabulary word, but also to their conversation partner. Filled pauses specifically allow the conversation partner to adjust their expectations for listening. For example, a filled pause normally signals a complex thought, or that an unusual word is on its way, thus priming the listener to pay extra attention to that part of the sentence and predict what’s coming next. When a second-language learner uses filled pauses for both usual and unusual words, the listener can use multiple techniques to facilitate communication. This includes slowing down, using simpler words, or avoiding slang and idioms. Although simplification may seem like a bad thing, it is a powerful discourse technique, as the language learner can now understand the conversation while being exposed to the native speaker’s pronunciation and grammar.

In addition to their frequency and duration, another important aspect to consider is where in a sentence the learner actually uses a filled pause. In a comparative study, De Jong (2016) found that intermediate to advanced L2 learners of Dutch produce a similar rate of filled pauses at syntactic boundaries when compared to L1 Dutch speakers. However, the same learners produced more filled pauses than L1 Dutch speakers within syntactic units. Why would there be a difference in the sentential placement of the learners’ filled pauses? To start, it’s tiring to have to continuously speak a second language; research shows that speaking a second language relies on the learner’s working memory. Essentially, second language speaking is an active process that requires more mental energy and resources than recalling your first language from long-term memory and leaves a speaker prone to fatigue and errors —- hence a greater use of filled pauses.

Given these findings, we might even encourage instructors to incorporate the teaching of filled pauses into their course designs. This could be especially important for second languages where filled pause usage differs substantially from a learner’s  first language. For example, it would be advantageous for an English-speaking L2 learner of Japanese to learn Japanese filled pauses in order to avoid confusion due to the languages’ differing sentence structures.
In the Ted-Ed video, we also addressed the point that language learners similarly learn how to produce the sounds of the filled pauses in their second language. All language learners are either multilingual or on their way to becoming multilingual, so it makes a lot of sense that these items should also be influenced by the different languages that someone speaks. Recently, García-Amaya & Lang (2020) found that bilingual speakers of Afrikaans and Spanish produced filled pauses that were mutually influenced by their two languages. Ultimately, filled pauses may be important for everyday speech in our first language, but they are absolutely essential when speaking a second one. The use of the second language’s filled pauses helps learners to blend in with more proficient language users, while giving their brain a short break when encountering difficulties in stringing together their words. Filled pauses additionally offer clues to an interlocutor than an important word might be coming up!

TED-Ed
Lesson Creator
New York, NY
What are the advantages and disadvantages of using hesitations and discourse markers as a second ...

"Jabberwocky": One of literature's best bits of nonsense

The race to decode a mysterious language 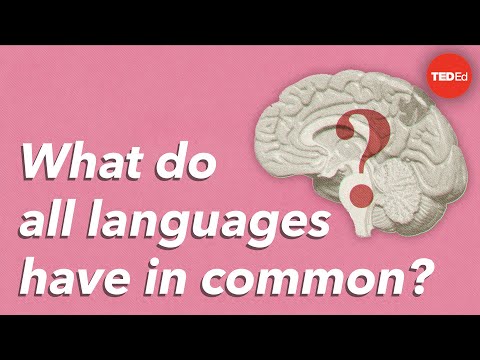 What do all languages have in common?