This year, TED-Ed is celebrating a big milestone: our tenth birthday!

When we published our first batch of videos on March 12, 2012, we didn’t know what TED-Ed’s future might hold. Now, we’re looking back on a decade of curiosity, asking and exploring answers to life’s big questions, and meeting one of the most inquisitive and supportive communities on the internet – that’s you! 1,400 videos and 3 billion views later, you’ve spent a whopping 166 million hours— almost 20,000 years— learning on our YouTube channel alone.

To celebrate the occasion, we’re sharing ten of our most-viewed videos— one published in each year that we’ve been around.

2012: Questions no one knows the answer to

Published in our channel’s first week, this video—written and narrated by TED Curator Chris Anderson—explores Chris’s boyhood obsession with quirky questions that seem to have no answers. At 12 minutes, it’s a bit longer than the traditional TED-Ed format, but Chris’s contemplative narration will keep you captivated throughout. (Also: Peep the original TED-Ed intro. Super cool. Also super long. We ended up shortening it in 2013 and again in 2017.)

The world’s most-hated bug stars in our top-viewed video from 2013. Because, let’s face it: everyone hates mosquitoes. Besides the annoying buzzing and biting, mosquito-borne diseases like malaria kill over a million people each year. So shouldn’t we just get rid of them? Rose Eveleth shares why scientists aren’t sure over a colorful (and itch-inducing) animation.

Over 20 million viewers have grappled with the concept of infinity since we first published this brain-bending video in 2014. The Infinite Hotel, a thought experiment created by German mathematician David Hilbert, is a hotel with an infinite number of rooms. But what if it’s completely booked and one person wants to check in? What about 40? Or an infinitely full bus of people? Jeff Dekofsky navigates this heady hotel using Hilbert’s paradox.

2015: Can you solve the prisoner hat riddle?

2015 was (for TED-Ed at least) the year of the riddle. We published our first (Can you solve the bridge riddle?) in September, and were blown away by its reception. Of the 60+ riddles we’ve shared since, the Prisoner Hat Riddle (published a month later in October 2015) still takes the gold for most-viewed. Can you solve it? If you’re stumped, don’t worry: Alex Gendler will show you how.

2016: What would happen if you didn’t drink water?

Hydration was clearly on people’s minds in 2016. And why not? Water is pretty important—it’s essentially everywhere in our world, and the average human is composed of between 55 and 60% of it. Mia Nacamulli details the role water plays in our bodies, and how much we actually need to drink to stay healthy in this ode to hydration.

Perpetual motion machines — devices that can do work indefinitely without any external energy source — have captured many inventors’ imaginations (and clearly many viewers’ imaginations!) because they could totally transform our relationship with energy. There’s just one problem: they don’t work. Why not? Netta Schramm describes the pitfalls of perpetual motion machines in this beautifully animated piece from 2017.

You might not expect a video about adhesives to have made our top 10, but over 12 million people tuned in to watch glue and tape spar it out in this 2018 battle of the bonds. Elizabeth Cox explains what gives glue and tape their stickiness, and whether one is stronger than the other in this video that will have you stuck to your screen. (PS. Did you notice the TED-Ed intro change again? We started incorporating quotes into our intros in August 2017 and never looked back.)

Our animated retellings of myths are always crowd favorites, and none resonated more in 2019 than this tribute to the Norse god of thunder. In this clever and comical video, Scott A. Mellor traces the legend of Thor’s hammer, and how Loki the mischief-maker’s cunning and deceit played into its creation.

While we’re a little concerned that our most viewed video in 2020 was about alcohol, the pursuit of information is something we can always get behind. Judy Grisel explores alcohol’s journey through the body, how exactly it causes drunkenness, and why it has dramatically different effects on different people in this pandemic blockbuster.

2021′s top performer is a real head-scratcher. On top of our heads, there is a type of yeast that lives and dines on all of our scalps. Feasting constantly, it’s in paradise. And in about half of the human population, its activity causes dandruff. So, why do some people have more dandruff than others? And how can it be treated? Thomas L. Dawson explores this problem in our top-viewed video from last year.

Thanks so much for sticking with us this past decade— for the obvious things like watching, liking, and subscribing, and for the not-so-obvious things like giving us video ideas, making us laugh in the comment sections, and more. We can’t wait to see what the next decade brings.

And, while we’re feeling emotional, we thought it would be nice to round this out with a quote from that first video on the list, “Questions no one knows the answer to.” We think it sums up the past, present and future of TED-Ed quite well:

“The quest for knowledge and understanding never gets dull. It doesn’t. It’s actually the opposite. The more you know, the more amazing the world seems. And it’s the crazy possibilities, the unanswered questions that pull us forward. So stay curious.” 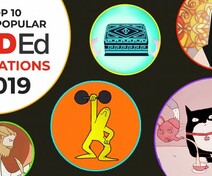 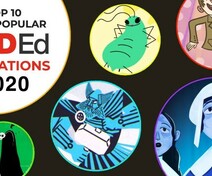 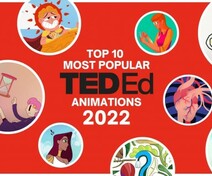